This summer HMRC calculated that the tax gap, the amount of money lost every year through tax evasion, is a staggering £32bn – although experts believe the true amount is much higher. This is more than the government’s entire annual budget for primary education. On 31 October the Chancellor is due to announce the next round of austerity, cutting billions of pounds from public services. Just think what could be avoided if everyone paid their fair share of tax.

When millionaires and multinationals use loopholes in the tax system to avoid paying what they owe it is the rest of us who suffer. Either through reduced funding for schools, hospitals and policing, or through paying more to fill the gaps.

My first job in politics was working for Nick Smith, MP for Blaenau Gwent and a member of the Public Accounts Committee. With Margaret Hodge chairing the committee, it uncovered aggressive tax avoidance from some of the world’s biggest companies.

That’s why I was proud that Hammersmith & Fulham council, where I am cabinet member for finance and reform, signed up to the Fair Tax Declaration. This commits the council to push for greater transparency from our suppliers and call for a change in the law to allow us to consider a firm’s tax status as part of the procurement process. 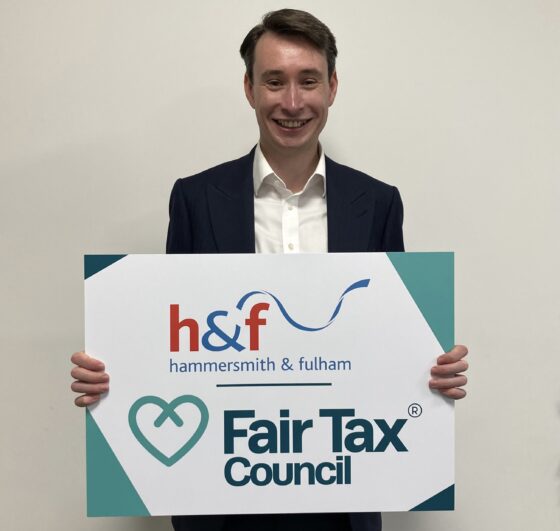 This small change could make a big difference. Councils across the country spend billions of pounds procuring goods and services. If suppliers knew that their tax conduct would be scrutinised, they would be incentivised to clean up their act so they could bid for this business.

Signing up to the Fair Tax Declaration sends a clear message about our values as a council. We are the 36th council to sign up and I hope many more will join us in promoting strong ethics in business practices. You can ask your council to sign up here.

It’s not fair that local book stores and cafes are having to compete with global corporations that think paying tax is beneath them. It’s not fair when CEOs pay a lower rate of tax than the people cleaning their offices. It’s not fair that governments around the world lose out on much needed tax revenue because money is funnelled through tax havens.

A fairer tax system is in everybody’s interest. I’m pleased that Hammersmith & Fulham has joined the Fair Tax Foundation in fighting for one.