It is a cross-party commission chaired by Seema Kennedy MP and Rachel Reeves MP, that has sought to start a conversation about how we can ensure that our future is one of connection, kindness and community, not isolation, separation and loneliness. Though the commission has focused on national government in its recommendations and call to action, there are recommendations for local government.

The commission defines loneliness as a subjective, unwelcome feeling of lack or loss of companionship, which happens when we have a mismatch between the quantity and quality of social relationships that we have, and those that we want. The commission found chronic loneliness linked to triggers such as moving home, changing schools or job, developing a health condition, becoming a parent etc. The health impact of loneliness is equated to smoking 15 cigarettes a day.

What can local government do?

The commission sets out a number of ways that local government can tackle loneliness through the services they already provide:

Loneliness and the Co-operative Movement

The Co-op Group was a partner organisation in the commission and have partnered with the Red Cross to raise awareness of loneliness. Their actions have included:

From strategy to action – Norfolk ‘In Good Company’

Norfolk’s ‘In Good Company’ campaign demonstrates how political leadership and strategic commitment can help drive action across all sectors. The campaign was developed at the impetus of the County Council, which had identified a link between loneliness and heavy use of social services. However, the approach taken was one of partnership, with the aim to create a movement against loneliness, right across the County.

The County Council started by convening partners from across the local voluntary and community sector, working with all communities and ages. Together partners developed the ‘In Good Company’ brand and planned the campaign which has now been operating for over a year. In the first six months of the Campaign the numbers engaging with the campaign on line or in person were equivalent to well over half of the County’s population.

‘In Good Company’ has inspired a wide range of activity on loneliness – from drop in sessions at Fire Stations, to intergenerational projects bringing together younger and older people to share digital skills. In June, 21 of the County’s libraries hosted events encouraging people to come together for The Great Get Together weekend; 20 local businesses have applied for the new ‘In Good Company’ quality mark, 60 new volunteers have come forward to support local organisations; and over 100 individuals have made pledges to act on loneliness. 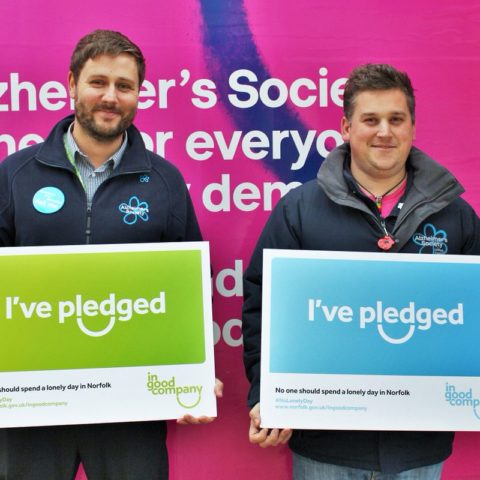 The ‘Great Wirral Door Knock’ was a local push to identify the ‘hidden lonely’ within the Metropolitan Borough of the Wirral, which used Age UK’s loneliness ‘heat maps’ to identify communities most in need of support.

The ‘Door Knock’ concept was developed by Age UK Wirral as part of the Testing Promising Approaches to reducing isolation and loneliness in later life programme, in partnership with the local authority’s Ageing Well Strategy Group. Heat maps were used to identify communities in which there were likely to be particularly high levels of loneliness, and these were then targeted by an army of volunteers, local councillors and staff led by Age UK Wirral working in partnership with Wirral CAB, Wirral Council, Merseyside Fire & Rescue, Merseyside Police and Merseytravel.

The team spent three days knocking on every door in the community handing out leaflets, and signposting people to local sources of support and activities. The first Door Knock took place in the Mill Park estate – with 1100 homes visited – and 78 referrals to support, seven new attendees at local lunch clubs and six new volunteers for local community organisations.

More Door Knocks have taken place since, guided by the Age UK heat maps – with the aim to complete four a year. Each time, the partnership of organisations offering support and volunteers grow. 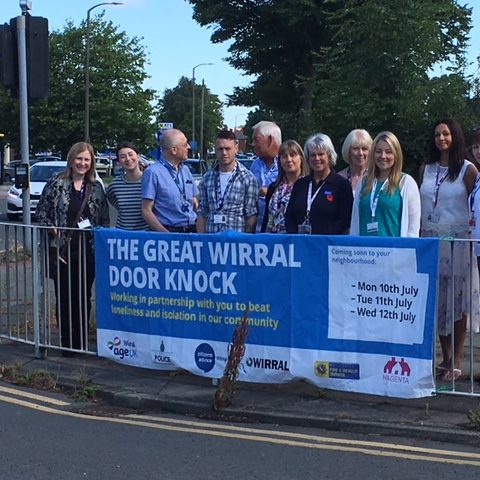 For more information about the Party's work on loneliness, or for support in with implementing these steps in your area, contact our Local Government Officer