As the world’s financial capital, London can lead the way in creating a banking system that works for the rest of us – Co-operative Party

London is the financial capital of the world. Every day, more than $1.85 trillion flows through its currency markets alone. 393,000 people are directly employed in financial services, while a fifth of all UK tax revenue is generated there.

It’s often remarked on that just a stone’s throw away from the wealth of City of London, there are staggering levels of deprivation and inequality.

But perhaps what’s equally staggering is that in a city whose business is banking, even a bank account can be hard to come by for some.

On Monday, the Greater London Authority’s Economy Committee published a report on financial exclusion in the Capital. Across the UK as a whole, almost two million people lack a current or basic bank account. Between 10 and 12 million people regularly turn to the ‘non-standard’ credit market – consisting of high cost payday lenders – to absorb financial shocks.

According to the University of Bristol, the overall cost of being poor is at least £490 a year. This so-called ‘poverty premium’ includes higher interest costs from more expensive forms of credit, as well as more expensive forms of billing such as prepayment meters and paper bills, a necessity for those who lack the convenience of direct debits or online banking.

While few London-specific figures currently exist (a point the authors themselves raise, calling for an annual survey of Londoners’ financial health), the Report notes that flat-lining incomes and particularly high housing costs, rates of self-employment and numbers of small businesses mean that, if anything, these issues are likely to be even more widespread in the Capital.

So while the banks of the City of London may be world leaders in generating shareholder dividends, staff bonuses and welcome tax revenues, it’s less clear that Britain’s highly concentrated, highly commercialised banking system is good for the health of the economy as a whole.

As we’ve previously written, while other countries – notably Germany – have a vibrant banking system consisting hundreds of local, public, co-operative and state banks, 85% of UK current accounts are held by just 5 large banks – all of them for-profit PLCs. 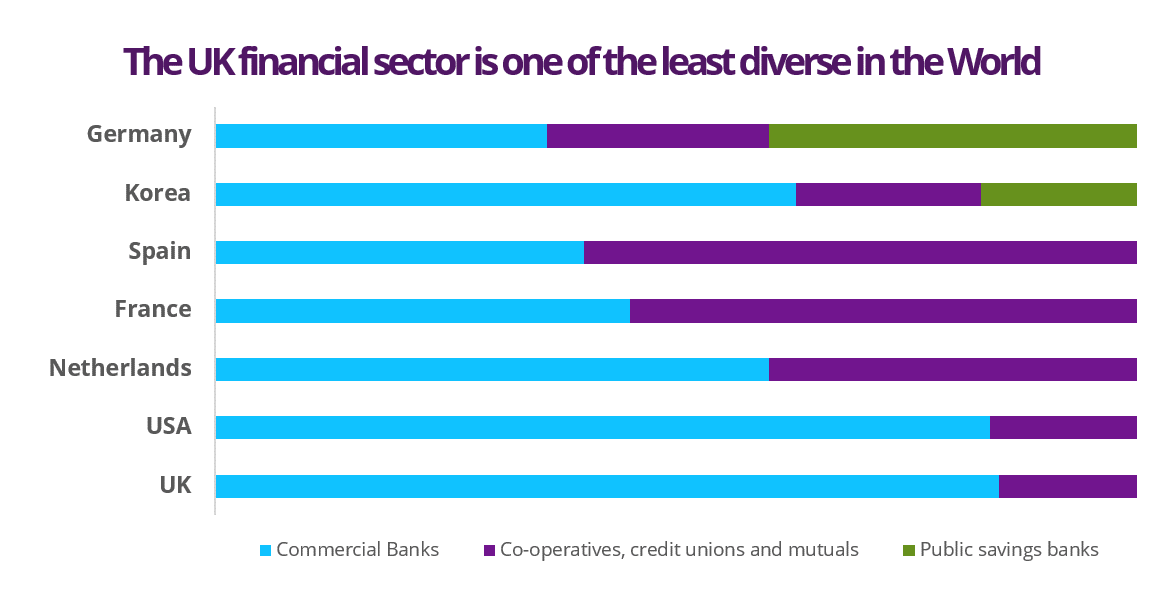 And as the Report makes clear, having a commercially successful financial sector isn’t the same thing as having a banking system that benefits the economy as a whole. They cite research by the New Economics Foundation which argues that socially-oriented ‘stakeholder’ banks outperform when it comes to lending in the real economy, with stakeholder banks lending 66 percent of assets to the real economy, compared to 37 percent by commercial banks.

While economies such as Germany surge ahead, supported by a diverse and vibrant financial sector, business lending in the UK has remained slow since the 2008 financial crash. The profit-driven commercial banks which dominate the UK have increasingly preferred quick returns from reliable but unproductive assets such as property over longer-term, but more productive small business and consumer lending.

So what’s the solution?

As the Report’s authors note, “Helping more people access a bank account is an important aim, but we must also recognise that the mainstream banking system is not working for a growing number of Londoners.”

The answer, then, as the Assembly’s report makes clear, lies in fostering a more diverse banking system in the Capital by supporting the growth of “locally-rooted, mission-led banks, lenders and credit unions” such as London Mutual Credit Union and Greater London Mutual community bank.

These types of financial institutions are owned by their customers, offering affordable borrowing, current accounts and savings to individuals from all backgrounds, with community banks also providing small businesses with access to the finance they need to grow and succeed.

The Report calls on the Mayor to commission a ‘money advice week’ to promote these kinds of alternative credit options, as well as putting Transport for London’s extensive advertising estate to work, using space on tube platforms and bus shelters to promote credit unions as a viable alternative to payday lenders and traditional banks.

At a strategic level, it identifies opportunities for City Hall to facilitate co-operation between community banks and credit unions, using their respective strengths to provide products and services that complement and reinforce one another, filling gaps in existing provision.

As the GLA’s report makes clear, the opportunity is huge. Long a centre of financial innovation and business enterprise, London is in a unique position to use its expertise to build a banking system that has social and economic objectives at its core.

Inspired by the kinds of inclusive, diverse and vibrant financial sectors that already underpin the World’s most successful economies, London can be at the forefront of developing a model that the UK sorely needs and deserves.

It’s up to all Londoners to ensure we take that opportunity.