Yet too many people across the UK – and here in Wales – are going hungry after nearly a decade of Tory austerity. The inexorable rise in food banks is just one symptom of a larger problem, made worse by cruel tax and welfare changes which have hit the lowest paid and most vulnerable in society. The causes of hunger are rooted in austerity, and UK Tory policies of Universal Credit, the benefits cap and freeze, the bedroom tax, have all played their part. But we also have a dysfunctional economy that no longer provides a fair day’s pay for a fair day’s work for too many people, and a broken housing market which adds to poverty and debt.

Too many people are going hungry on a daily basis, in the UK, the 6th richest country on the planet. At the same time we have a relentless growth in obesity and Type 2 diabetes, which can devastate the quality of life of an individual and shorten lives, and also impact on our NHS. And some communities are now effectively “food deserts” where people simply cannot access nutritious, healthy and affordable food.

This is a UK-wide problem, but we can’t ignore the recent findings of the South Wales Food Poverty Alliance report that states:

We can and must use every mechanism at our disposal to tackle this in Wales, even if at a UK level the government seems hell-bent on making things worse. We have the right policy and legal framework in Wales to do this with the ‘Well-Being of Future Generations Act’ (WBFG Act), and a cross-government commitment to tackling poverty in all its forms. But we need to do more to tackle Food Justice.

We need practical actions, and clear milestones to track progress. And we need local as well as national action. We all have a part to play. 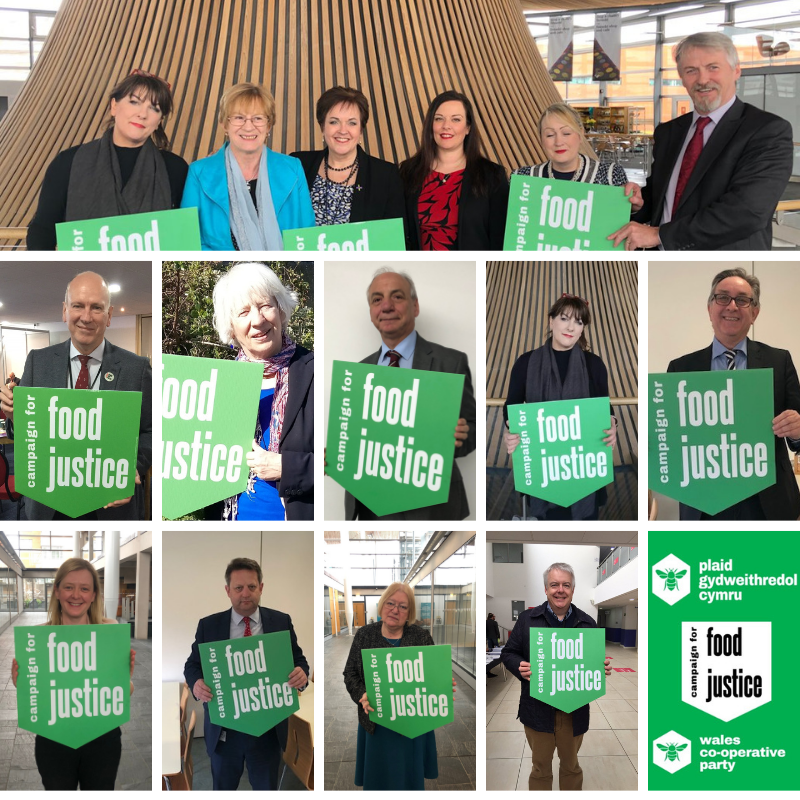 So at a local level we’re calling for: councils throughout Wales to designate a lead member for food poverty; to draw up a food action plan working with local partners; to take inspiration from emerging community responses to food poverty; to work with your existing local food partnership, or to set one up; and to get a measure of the scale of the problem in your area.

At an all Wales level, underpinned by the flagship WBFG Act, we are calling for the recognition of the right to healthy and nutritious food, and a commitment to delivering food justice in the new ‘national milestones’ in Wales so we can track progress.

At April’s Welsh Labour conference in Llandudno it was heartening to see so many people – including councillors and council leaders, grassroots Co-operative and Labour Party members, PCCs, AMs and MPs and Welsh Government Ministers – stop by the Wales Co-operative Party stall to support our Food Justice campaign. The Food Justice fringe event was well attended with some really inspirational speakers.

So now, let’s turn this campaigning energy into Food Justice action at a local and national level. We believe that access to nutritious and healthy food is a right. Let’s take the practical steps to make Food Justice a reality in Wales.

Find out more about the campaign and add your support here: Food Justice