The Co-operative movement is at the forefront of tackling the issue of modern slavery. From Labour & Co-operative MPs and Peers seeking to guarantee all victims at least 12 months care and support; to the Co-operative Group providing paid employment opportunities for victims.

What is Modern Slavery?

Modern Slavery is the one of the great evils of our time and it’s happening under our noses. In nail bars, car washes, farms, factories and restaurants, it is estimated that tens of thousands of people in the UK could be victims.

The term ‘Modern Slavery’ captures a whole range of types of exploitation, many of which occur together. These include but are not limited to:

What role do local authorities have?

Local authorities have a number of statutory duties under the Modern Slavery Act 2015. This includes the duty to notify the Home Office of any individual encountered in England and Wales who they believe is a suspected victim of slavery or human trafficking.

However, there is a lot more councils can do to raise awareness and ensure their own supply chains don’t contribute to modern slavery.

In 2016 the Co-operative Group formed a partnership with national charity City Hearts to develop the ’Bright Future’ programme. Bright Future provides a pathway to paid employment for victims of modern slavery, which includes a paid work placement in a Co-op store or site, followed by a non-competitive job interview.

They have also partnering with the Snowdrop Project, another charity who work to rehabilitate victims of modern slavery. The Group’s goal for 2017 is to offer at least 30 people who have been rescued from slavery the opportunity of a paid work placement and a job in the business if they wish.

Tom Hayes is an Oxford City Council cabinet member with responsibility for modern slavery and human trafficking. He brought a motion to the council highlighting that victims of modern slavery only get 45 days of recovery and support while the Home Office assesses their case and that is all they are currently entitled to under the law.

The motion supported calls by Labour & Co-operative MPs and Peers to increase the length of support for an additional 12months. 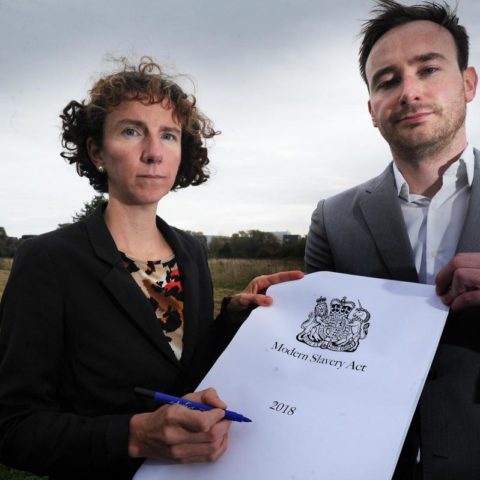 What should I do if I find instances of Modern Slavery?

Modern Slavery is a criminal offence in the UK and if you suspect this is occurring you should report it immediately.